The Complete Guide to OpenPose in 2023 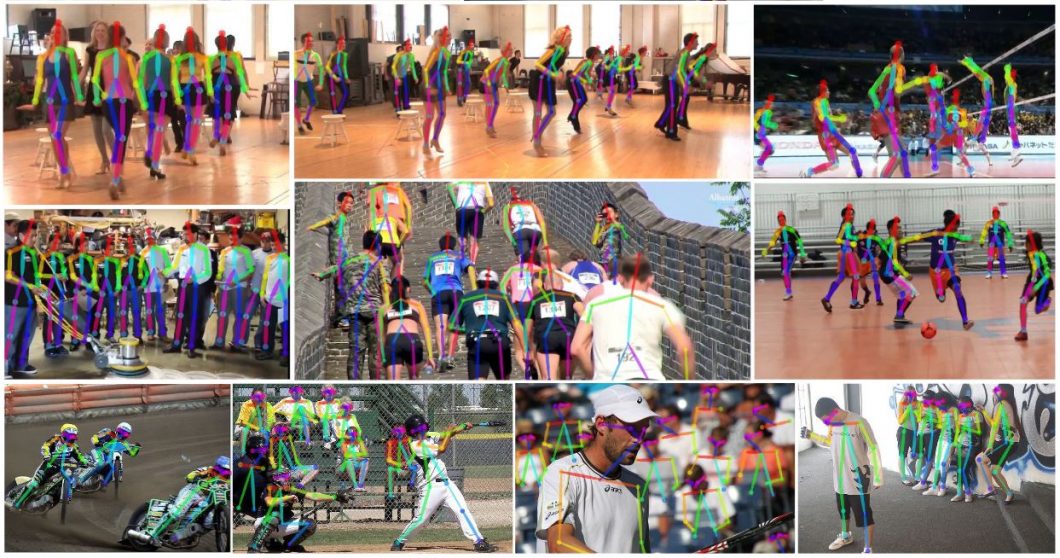 This article provides a guide to the OpenPose library for real-time multi-person keypoint detection. We will review its architecture, features, and comparison with other human pose estimation methods.

About us: Viso.ai provides the leading end-to-end Computer Vision Platform Viso Suite. Global organizations use it to develop, deploy and scale all computer vision applications in one place, with automated infrastructure. Get a personal demo.

In the era of AI, more and more computer vision and machine learning (ML) applications need 2D human pose estimation as information input. This also involves subsequent tasks in image recognition and AI-based video analytics. Single and multi-person pose estimation is an important computer vision task and may be used in different domains, such as action recognition, security, sports, and more.

A human pose skeleton denotes the orientation of an individual in a particular format. Fundamentally, it is a set of data points that can be connected to describe an individual’s pose. Each data point in the skeleton can also be called a part or coordinate, or point. A relevant connection between two coordinates is known as a limb or pair. However, it is important to note that not all combinations of data points give rise to relevant pairs.

Knowing a person’s orientation paves the road for many real-life applications, many of them in sports and fitness. A lot of approaches to human pose estimation have been proposed over the years. The first-ever technique typically estimated the pose of a single individual in an image consisting of a single person. OpenPose provides a more efficient and robust approach that allows applying pose estimation to images with crowded scenes.

OpenPose is a real-time multi-person human pose detection library that has for the first time shown the capability to jointly detect the human body, foot, hand, and facial keypoints on single images. OpenPose is capable of detecting a total of 135 keypoints.

The method is the winner of the COCO 2016 Keypoints Challenge and is popular for its decent quality and robustness to multi-person settings.

What are the features of OpenPose?

The OpenPose human pose detection library has many features but given below are some of the most remarkable ones:

Costs of OpenPose for commercial purposes

OpenPose was licensed under a license that allows free non-commercial use and redistribution under these conditions. If you want to use OpenPose in commercial applications (non-exclusive commercial use), they require a non-refundable annual fee of $25’000 USD.

Pose Estimation algorithms usually require significant computational resources and are based on heavy models with large model sizes. This makes them unsuitable for real-time applications (video analytics) and deployment on resource-constrained hardware (edge devices in edge computing). Hence, there is a need for lightweight real-time human pose estimators that can be deployed to devices to perform on-device edge machine learning.

Lightweight OpenPose is a heavily optimized OpenPose implementation to perform real-time inference on CPU with minimal accuracy loss. It detects a skeleton consisting of keypoints and the connections between them to determine human poses for every single person in the image. The pose may include multiple keypoints, including ankles, ears, knees, eyes, hips, nose, wrists, neck, elbows, and shoulders.

The fastest and easiest way to use OpenPose is using a platform like Viso Suite. This end-to-end solution provides everything needed to build, deploy and scale OpenPose applications. Using Viso Suite, you can easily apply OpenPose using common cameras (CCTV, IP, Webcams, etc.), implement multi-camera systems, and compute workloads on different AI hardware at the Edge or in the Cloud (Get the Whitepaper here).

The OpenPose library initially pulls out features from a picture using the first few layers. The extracted features are then inputted into two parallel divisions of convolutional network layers. The first division predicts a set of 18 confidence maps — with each of them denoting a specific part of the human pose skeleton. The next branch predicts another set of 38 Part Affinity Fields (PAFs) that denotes the level of association between parts.

The later stages are used to clean the predictions made by the branches. With the help of confidence maps, bipartite graphs are made between pairs of parts. Through PAF values, weaker links are pruned in the bipartite graphs. Now, applying all the given steps, human pose skeletons can be estimated and allocated to every person in the picture.

Overview of the Pipeline

OpenPose is one of the most well-renowned bottom-up approaches for real-time multi-person body pose estimation. One of the reasons is because of their well-written GitHub implementation. Just like the other bottom-up approaches, Open Pose initially detects parts belonging to every person in the image, known as key points, trailed by allocating those key points to specific individuals.

RMPE or Alpha-Pose is a well-known top-down technique of pose estimation. The creators of this technique suggest that top-down methods are usually based on the precision of the person detector, as pose estimation is conducted on the area where the person is present. This is why errors in localization and replicate bounding box predictions can result in the pose extraction algorithm working sub-optimally.

To solve this issue, the creators introduced a Symmetric Spatial Transformer Network (SSTN) to pull out a high-quality person region from an incorrect bounding box. A Single Person Pose Estimator (SPPE) is applied in this extracted area to estimate the human pose skeleton for that individual. A Spatial De-Transformer Network (SDTN) is applied to remap the human pose back to the initial image coordinate system. Moreover, the authors also introduced a parametric pose Non-Maximum Suppression (NMS) method to handle the problem of irrelevant pose deductions.

Along with this, a Pose Guided Proposals Generator has also been proposed to multiply training samples to help better train the SPPE and SSTN networks. The most important feature of Alpha-Pose is that it can be extended to any blend of a person detection algorithm and an SPPE.

Last but not least, Mask RCNN is a well-known architecture for performing semantic and instance segmentation. It anticipates both the bounding box locations of the different objects in the image and a mask that segments the objects semantically (image segmentation). The architecture of Mask RCNN can be simply extended for human pose estimation.

Now, the extracted features are passed into the parallel branches of CNNs for the ultimate prediction of the bounding boxes and the segmentation masks. The object detection algorithm can be trained to determine the region of individuals. By merging the person’s location information and their set of keypoints, we can obtain the human pose skeleton for every individual in the image.

The lightweight variant makes it possible to apply OpenPose in Edge AI applications and to deploy it for on-device Edge ML Inference.

To develop, deploy, maintain and scale pose estimation applications effectively, a wide range of tools is needed. The Viso Suite platform provides all those capabilities in one end-to-end solution. Get in touch and request a demo for your organization.

An Introduction to Federated Learning: Challenges and Applications

An easy-to-read guide about what makes YOLOv7 the fastest and most accurate object detection algorithm, with real-world examples.
Read More »