The Top 10 Applications of Computer Vision in Aviation 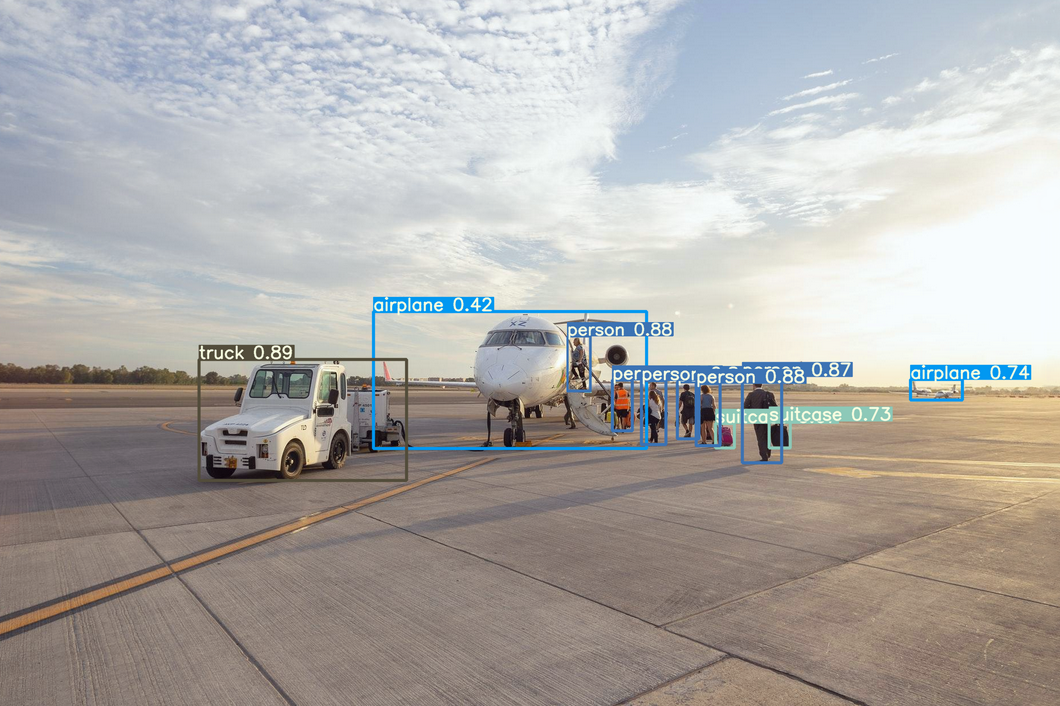 Computer vision is an application of artificial intelligence that enables machines to interpret and understand digital images. The aviation industry has been quick to adopt computer vision technology in order to improve safety and efficiency.

The fields of use are very broad and include recognition and detection of airplanes, airport security and management, plane identification, autonomous flying of drones, and even missile guidance systems. In this article, we share some of the top applications of computer vision in aviation.

About us: We power the Viso Suite, the world’s only end-to-end computer vision platform, to build, deploy and scale real-world applications. Leading organizations use our no-code software infrastructure to deliver and scale their AI vision applications. Book a personal demo today.

Computer vision is also used in aviation for tasks such as aircraft inspection and maintenance. By using images of the aircraft, technicians use machine learning to detect problems and recognize damage patterns that may not be visible to the naked eye. AI vision inspection helps to improve safety and avoid potential accidents or downtime.

In addition, computer vision can be used for the automatic examination of aircraft components to reduce the amount of time and labor required for manual inspection. It further helps to increase the objectivity and consistency of the assessment.

Computer vision is being used more and more in airports for baggage handling. Deep learning systems can automatically read labels with machine vision (Optical Character Recognition) to identify trolleys and their locations. This helps to improve the efficiency of the baggage handling process and reduces the chance of lost luggage. It further reduces the number of errors and makes it easier to find misplaced luggage.

Computer vision systems use cameras to scan the tags on luggage and match them with the information in the airline’s database. This allows airport workers to quickly identify which bag belongs to which passenger. One of the first airports to implement a machine vision system was London Heathrow in 2014. Since then, many other airports have followed suit.

Another visual deep learning application helps to identify and localize ground vehicles and baggage tugs and carts at airports. This is important to increase the efficiency of managing and distributing baggage carts. In addition, vehicle identification and localization help to avoid ground vehicle collisions, which are a major cause of accidents at airports.

Computer vision can also be used for security applications. By installing cameras at strategic locations, it is possible to track the movement of people and objects at airports. Real-time information and reports help to identify potential security threats and improve operational security.

Important applications of AI vision monitoring with computer vision include: 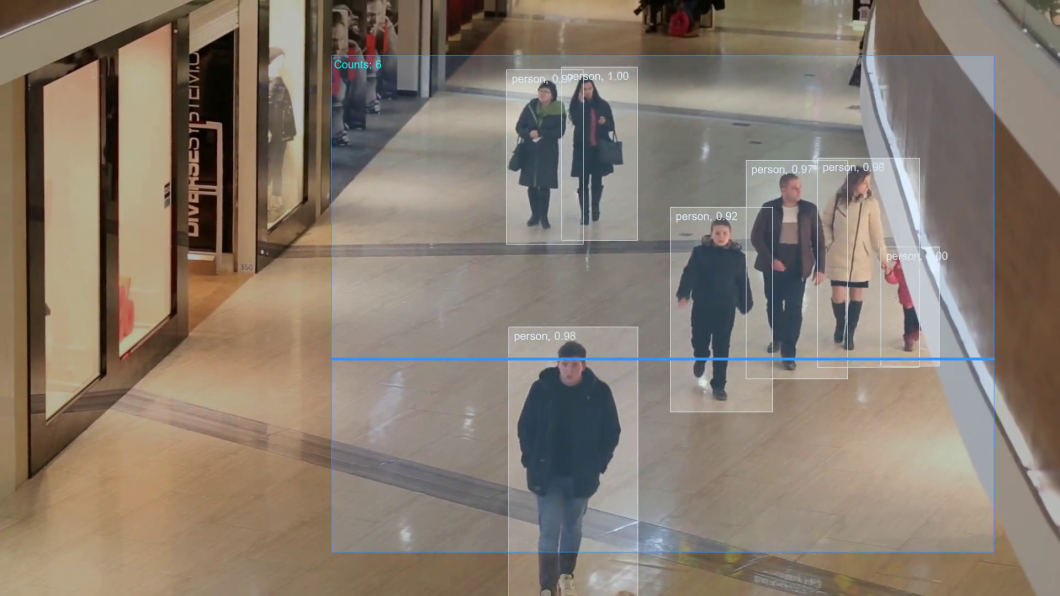 Computer vision based facial recognition software is used to identify passengers at airports. Such AI software compares the passenger’s face to a database of images that have been pre-loaded into the system. The system performs face detection and face recognition with common IP cameras.

Face analysis technology is used in order to streamline the boarding process and to make sure that only passengers who are supposed to be on a particular flight are able to board. In some cases, facial recognition software is also used in order to identify suspected criminals or individuals that are on no-fly lists.

Computer vision is being used more and more in the field of runway inspection. By using cameras and sensors, airport personnel can detect any potential problems with the runway surface. This is a critical task since small cracks or potholes in a runway may have dramatic consequences.

Such systems use a variety of sensors, including infrared and thermal imaging, to create a detailed map of the runway surface. This information can be used to identify any defects or damage that may need repair.

Other large-scale runway inspection applications use multiple cameras with deep learning detection to identify unauthorized people or detect airplanes on the landing field.

Advanced computer vision algorithms help airport security personnel to inspect the cargo for any potential threats such as explosives, weapons, or narcotics. AI-assisted cargo inspection helps to speed up the process of getting cargo through security and onto the plane.

For example, a deep learning model can be used to detect explosives or narcotics in a shipment by applying pattern recognition to image data from scanners or cameras. To learn those patterns, the neural network is trained on annotated images of known explosive materials.

Once the algorithm is trained, it can then be used to scan new image data to recognize such patterns. If the algorithm finds a match, it can raise an alert to trigger a manual inspection.

As unmanned aerial systems (UAS) become more complex and widespread, they present new challenges in terms of safety, security, and privacy. One growing concern is the number of incidents involving drones near airport facilities. As drone technology continues to evolve, it is likely that such incidents will become more frequent and severe. In order to protect critical infrastructure from potential aerial attacks, it is important for airports to have effective countermeasures in place.

Counter-drone systems often involve multiple sensors, radar, PTZ, and infrared cameras to detect rogue drones in a geofenced area around the airport. Some counter-drone systems also have the ability to intercept and destroy drones that are deemed a threat. These systems use high-powered lasers or radio signals to disrupt the drone’s electronics, causing it to crash.

Vision-based control has been successfully used in a number of different UAV platforms, including fixed-wing aircraft, helicopters, and quadrotors. For example, computer vision is applied in UAVs to improve their autonomies both in flight control and perception of their surroundings.

Based on images and videos captured by onboard cameras, vision measures, such as stereo vision or optical flow fields, extract features that can be integrated with a flight control system to form visual serving, also known as vision-based robot control.

In defense and military applications, computer vision is playing an increasingly important role in the guidance of missiles and other airborne weapon systems. By tracking the position and movement of targets, computer vision can help ensure that missiles hit their targets with pinpoint accuracy. This technology is also being used to develop autonomous weapon systems that can function with reduced or without human input. While there are some concerns about the safety and morality of such systems, there is no doubt that computer vision is a powerful and cost-efficient technology of great importance for military purposes.

In autonomous missile technologies, the dynamics of the flight path are determined by the onboard missile guidance system. Image processing is used in combination with other intelligent sensors to identify any type of target, while traditional detection is limited to heat/fire (aircraft) and other signatures. Hence, computer vision based guidance systems are able to differentiate between targets and continuously update the latest error correction in the flight path.

For example, Point Feature Matching techniques have been proven to be very effective for detecting a particular object or landmark in an image. The point feature matching is achieved by comparing multiple corresponding points of objects and analyzing the points between cluttered scene images to localize the object of interest. In simple words, the algorithm tries to find correspondence points between a target and reference images to detect a particular object (target). Then, the algorithm tracks the object in real time and estimates its motion model.

In self-targeting missile systems, the use of visual sensing to acquire and track targets has the potential to significantly reduce costs in comparable active sensors. The image processing algorithm solves multiple tasks for target detection, identification, tracking, and estimation of motion for passive homing missile autopilot guidance. Therefore, multiple techniques are applied in combination, such as foreground segmentation to identify new objects in a scene and Speeded-Up Robust Features (SURF) detection – a patented local feature detector and descriptor – for object recognition and position tracking. 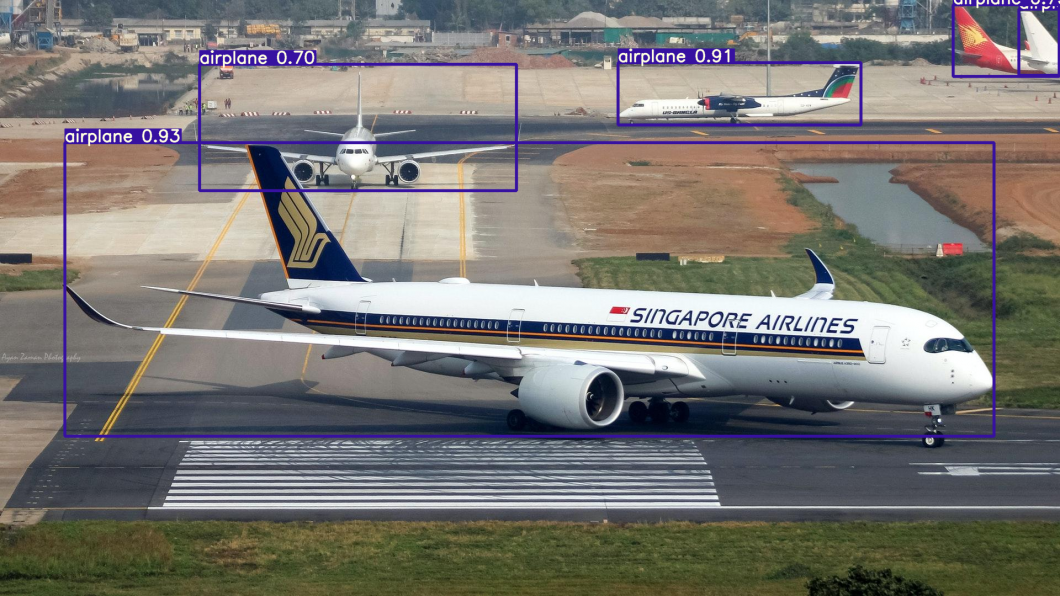 To provide a more accurate identification system, computer vision systems use multiple steps. In a first step, a convolutional neural network (CNN) model identifies the aircraft type. The use of an aircraft classifier (airplane classification) is used to decrease the search space.

In the second step, the tail number is recognized within the search space, using optical character recognition (OCR) across multiple frames to provide robust text recognition in real-time video analysis.

Computer vision is being used extensively in aviation for a wide range of purposes. These applications are just the beginning, and we can expect to see even more innovative uses for AI vision in the future. Recent advances in emerging technologies such as Edge AI, AIoT, and deep learning enable the development of even better and more robust machine learning solutions, while significantly improving the efficiency and cost of computer vision.

Being a Computer Vision Engineer in 2023

See how your team can build your real-world AI vision systems faster with our end-to-end solution.